The Blue Gem Lease Mine has been staked also as the Turquoise Tunnel and the Contention, and at one time it was on the Pedro Lode claim belonging to the Copper Canyon Mining Company. The Blue Gem mine is located south of Battle Mountain, in the SE 1/4 of Section 29, T. 32 N., R. 44 E., at about 4,000 feet north - northeast of Copper Basin. It is surrounded by the copper workings of the Copper Canyon Mining Co. The parent company is the Duval Corporation. Blue Gem turquoise occurs in argillized quartz monzonite cut by two limonite-stained sheer zones, one trending N. 35 o W. and dipping 75 o NE., the other trending N, 25 o E. and dipping 55 o NW. An extensive breccia zone about 10 feet wide is developed between the two bounding sheers. Exceptionally good quality turquoise forms veinlets up to three-quarters of an inch thick along the shears. Pyrite-bearing quartz veins are closely associated with the turquoise. The Blue Gem mine was at one time located deep underground, accessed by tunnels as deep as 800 feet. This is of interest because the Blue Gem Mine and the Bisbee Mine in Arizona are the only two mines (of which we are aware) that turquoise was found that deep in the earth. The Blue Gem mine was once developed in extensive underground workings. An adit several hundred feet long on the main structure connected to numerous shorter tunnels and several open stopes. Directly above the main adit was a glory hole some 100 feet long. The Blue Gem deposit was first noted by Duke Goff in 1934. It was subsequently leased from the Copper Canyon Mining Co. by the American Gem Co. of San Gabriel, CA., owned by Doc Wilson and his sons, Del and William. The company operated the property until 1941 when the outbreak of the war caused a shortage of experienced miners. When both Del and William Wilson were called into the Army, the mine was closed for the duration of the war. Consequently, the lease was allowed to lapse and work was abandoned. In 1950 the mine was leased by Lee Hand and Alvin Layton of Battle Mountain. In the early days of the operation, production of turquoise at the Blue Gem Lease was enormous. Although there is no exact information, it is reported that the output amounted to nearly $1 million in rough turquoise. The mine is still active, although it is currently in the center of a major copper deposit being developed by Duval Corp. Pyrite in Blue Gem is unusual to see but not unheard of. Very little large material ever came out of Blue Gem. The majority found was small 1-3 mm "bleeder" veins, which often came in sheets measuring 2 inches x 2 inches, as well as tiny nuggets which was perfect for Zuni inlay and fine needlepoint, petit-point and snake-eyes jewelry. Blue Gem turquoise was very popular in the late 1930's and 40's and was commonly used in the Fred Harvey "railroad and tourist jewelry" that is so collectable today. Blue Gem turquoise is extremely hard and stands up well to the test of time. Blue Gem turquoise is a rare, valuable and historic American treasure. Quality Blue Gem Turquoise has been gifted with a wide range and variety of color, from a beautiful sky blue to an aqua blue-green, not unlike parts of the Mediterranean Sea. Because Blue Gem turquoise is very hard, a high polish is associated with this stone, and unlike most turquoise, it won't easily change color. This turquoise has a unique character and many different looks all of which are striking, full of wonder and pleasing to the eye. Production of the mine started about 1934 and continued into the 1970's. Blue Gem Turquoise is still some of the finest turquoise ever found, and unlike most turquoise mines, (in which the majority mined is chalky and only usable if stabilized) most of the turquoise found there was of gem-quality. Today the Blue Gem mine can no longer be worked, as it sits in the middle of a huge mining operation. The emphasis is on precious metals; the extraction of turquoise is considered more of a hindrance in the mining process than an asset. Even the ever popular "Dump Diving" for turquoise is not tolerated due to the very real danger of becoming buried in a slide. Insurance factors, equipment hazards, high explosives and safety issues, along with a lack of interest from the mining company, keep Blue Gem turquoise unavailable to the world, at least for now. The original Battle Mountain blue Gem Mine no longer produces turquoise, although numerous other mines in the area now carry the same name. The only true old Blue Gem turquoise available today is through old collections. 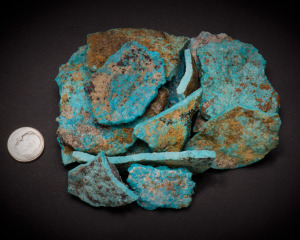 Beautiful flat vein slabs of clear blue turquoise from a classic and historic mine that will never produce again. 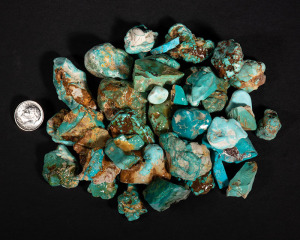