Also known as inca-rose because of the main deposit in Argentina, near San Luis. Formed as stalagmites in the ancient silver mines of the Incas, which they worked until the the 13th century. Has a hardness of 3.5-4. Most often formed in light-dark bands of bright raspberry red, this material is thought to cause changes in the emotional realm, which often result in alterations to the physical aspect of those who wear it. Restores confidence; heals wounds of the spirit; guides one to new love and emotional happiness. Rhodocrosite focuses its energy only on those negative patterns which have been highlighted by the conscious mind. It has a vibratory rate that destroys the patterns which restrict an individual’s growth. It also cleanses any disharmony caused by the destruction of these patterns, allowing the rhodochrosite to help rebuild new patterns within. Rhodocrosite can truly be used as a tool to change our lives. 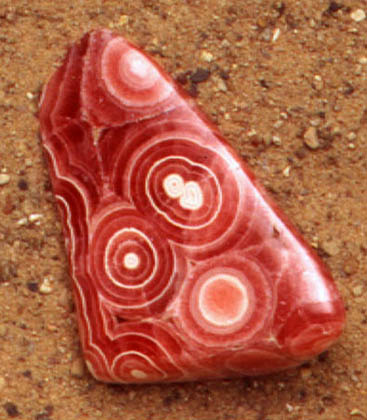