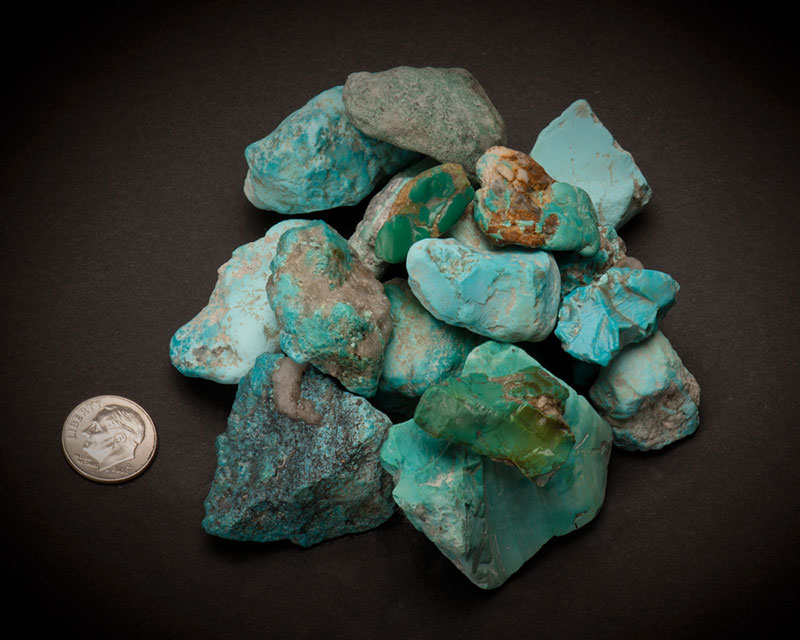 Kingman Turquoise originates in the Mineral Park Mining District near Kingman, Arizona. One of the largest domestic turquoise mines, it is found in a large open pit copper mine in the high desert country. The Kingman Mine district was first mined by Native Americans; it was part of the most extensive prehistoric workings in Arizona. However, modern production of turquoise dates back to the 1880's when James Haas rediscovered the area. Natural Kingman Turquoise ranges in color from light to very dark blue and sometimes tints of green. Matrix can range from white, light brown to black and frequently flecked with pyrite and occasionally quartz. The most famous stones from this mine are rounded bright blue nuggets with black matrix. Few turquoise mines produced nuggets, especially of this quality. In its high-grade form it has always been considered among the top quality American turquoise. This high blue color has become a “color standard” in the industry, reflected by the name “Kingman Blue”. However, much of the turquoise from Kingman occurs as seams, masses and veins, rather then in nugget form. Besides the nugget form, the most desirable Kingman turquoise is a deep blue with molybdenum pyrite; also, deep blue with pyrite as well as in a “bird's eye” pattern with “water web” matrix. The mine is currently owned & Operated by the Colbaugh family’s company, Colbaugh Processing. While old natural Kingman turquoise is rare, they have recently gone back into older sections of the Kingman mine and are bringing out some new natural Kingman Turquoise. Although there are quantities of this fine natural deep blue turquoise available, the largest percentage of turquoise mined at Kingman is being treated or stabilized. There are several other names for the turquoise coming out of the Kingman mining district: Ithaca Peak, Old Man Mine, Kingman Duval, Courtland, The Wall and Turquoise Mountain, just to mention a few.