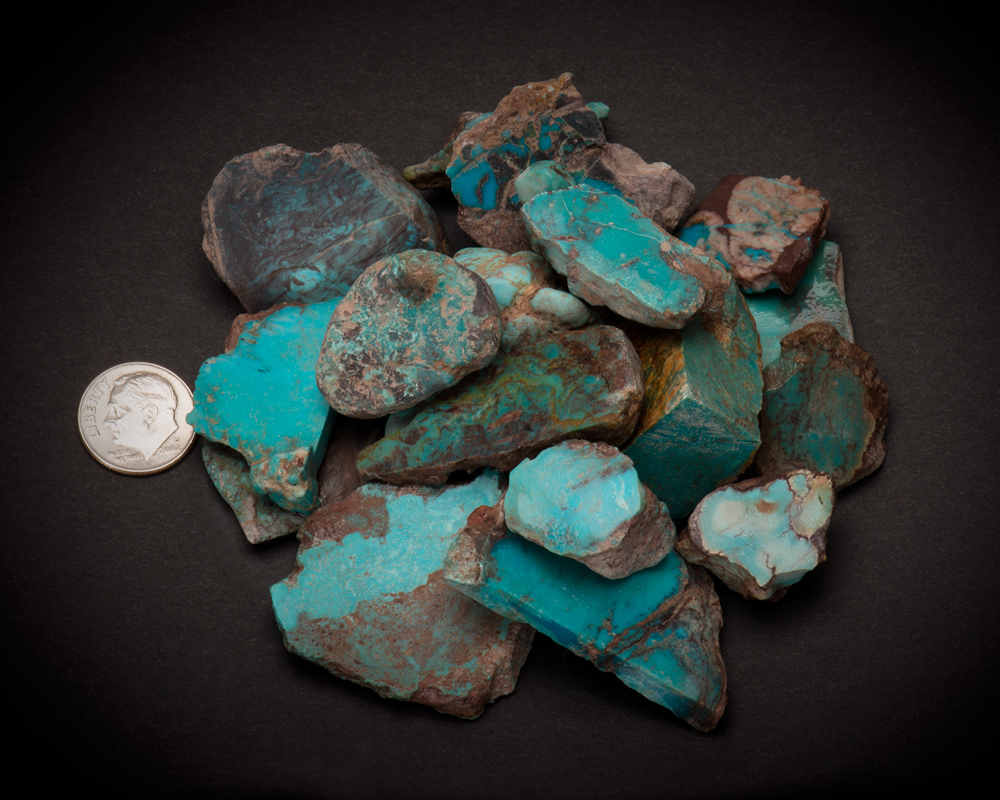 “Bisbee Blue” is a name that originates from the Bisbee Mine, near Bisbee, Arizona, in Cochise County, USA. The term refers to the turquoise that comes from copper mines in this region. Turquoise from Bisbee has a reputation as a hard, finely webbed stone with high blue color, ranging from sky blue to a dark lavender blue. The matrix patterns vary a great deal, but can be characterized by the deep chocolate brown to black webbing. The hardness is 4.5 on the mohs scale. The name “Bisbee” conjures a mystique among all turquoise aficionados, and it is one of the most sought after of all domestic turquoise. The turquoise from Bisbee is highly collectible and it is one of the more famous of the American mines. Although the turquoise from Bisbee has a wide variety of color and hardness, the most exceptional quality originates from the Lavender Pit in the Copper Queen Mine, especially the east side. Such stone has beautiful high blue color with a dark distinct often rust colored matrix. The turquoise is found as stringers that form as much as a few inches wide, as well as minute stringers in pyrite; also, small nugget masses in granite and quartzite. Bisbee turquoise was one of the first to appear on the modern American market, which is at least partly responsible for its fame. The turquoise mine was a secondary operation to the Bisbee copper mine, operated by the Phelps Dodge Corporation. The vast majority of Bisbee turquoise surfaced when the Phelps Dodge started their open pit mining operations at the location now known as the Lavender Pit.The mine has been closed since the early 1970's, so anything new coming from the mine has been scavenged from the old dumps. Much conglomerate rock had to be removed by Phelps Dodge before the deeper copper ore could be mined. This conglomerate was considered waste rock to the mining company, but was actually a hidden treasure as the host rock for Bisbee turquoise. This waste was discarded in huge piles called "dumps." The corporation made no decided effort to recover the turquoise, so almost all of it was recovered by company employees taking it out covertly in lunch boxes.Though this activity was prohibited, it was rarely enforced. For several years, through the late 1970’s, these individuals (locally known as "dumpers"), were the only source for this fine turquoise. Also, during this time, Phelps Dodge began leasing out rights to individuals to mine the dumps for turquoise. However, the large majority of Bisbee turquoise was extracted during the 1950’s and 1960’s through the covert actions of mine employees. There are other very rare materials from Bisbee that were mined both from stream beds in the Mule Mountains, as well as from the Campbell shaft. The various lesser known formations, other than turquoise, among the copper oxides of Bisbee are of interest, as they rarely form in a similar way anywhere else in the world. There is a conglomerate mix of Azurite, chatoyant malachite, chrysacola and cuprite…all in a single stone, coming from the Campbell Pit, that is incredibly understated and altogether unrecognized for its uniqueness. In 2004, Phelps Dodge Corporation decided to bury the old mine under hundreds of tons of dirt and rock. They felt that the miners, due to the increasing value of the turquoise, were paying too much attention to the turquoise and not enough to copper mining.